DESIGN: The wood, in all its shades

For some years, the wood is back in fashion in our daily lives. Acclaimed by young artists and designers, it modernizes and takes surprising forms. 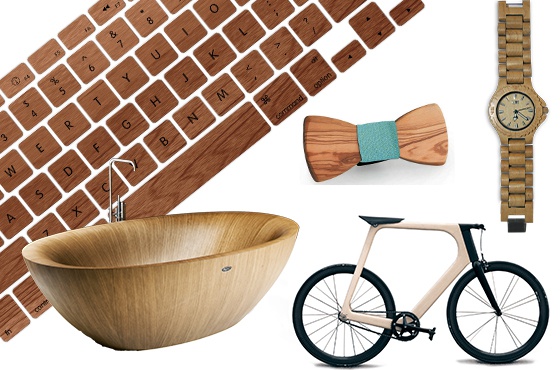 With a sensual touch and a rich texture, wood offers an authenticity that rhyme with quality. The lightness of pine and birch count among the most popular materials, as well as oak, wild cherry, walnut or beech, darker in color. With their red highlights and their warm brown, mahogany and rosewood are the sought-after classics, while wenge and teak are the favorites among those exotic.

Wood has found again its fame before being consecrated in the summer of 2014. Several brands have thus earned the heart of the dandy who accessorizes its clothing with a touch of ecologic glamor. Today, wood can be wore on nose, wrists or around the neck, becoming glasses, bow tie, watch, wallet or a protection for smartphones and tablets.

Present in the most unusual branches, it is now possible to find a computer keyboard, a mouse or an induction charger made of wood. While it is clearly used to model clocks and furniture seating, it is also used to create original pieces of furniture. The prestigious bathtubs designed by Alegna, such as the Laguna Pearl cut in mahogany, in iroko or in pear, are real sculptures.

The designers have chosen it as material of the year, a fact not denied by Till Breitfuss and Paule Guérinde, the founders of Keim. Their beautiful bike Arvak, born in Touraine, has been noted in early September at the Paris Design Week. With its white ash frame and its minimalist silhouette, Arvak elegantly demonstrates that wood is trendy.