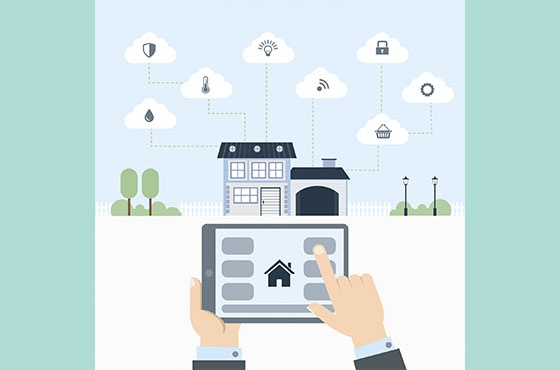 According to the "Étude sur la Maison Connectée", published in October 2015 by the Fédération Française de Domotique (French Home Automation Federation), the connected objects’ market for Home automation is growing every day. In fact, 9% of French people plan to live in a connected house within a year and already 34% of French people want to live in an intelligent home, in which objects will communicate with each other. According to this study, 57% of those surveyed (amongst French, German and English) think of equipping their kitchen first, ahead of the bedrooms (15.2%) and living room (14.6%).

Home automation, which encompasses all the technologies used to automate the management of a house, becomes commonplace and it is easy to find homes for sale on the French Riviera, for example, entirely domoticized. This proves, perhaps, that the use of connected objects within the home is becoming common practice.

In the list of connected objects there are those already well installed such as televisions, thermostats or sound systems. Everything has been designed to make life easier for the resident. Air purifier, intelligent locks, light bulbs, lighting, watering, surveillance systems... Now, the house can be controlled from a smartphone.

The connected object is everywhere. It now allows you to track down a pet (GPS necklace) or take care of him even if you have gone out. It also allows you to measure your sporting performance (watches and bracelets)... Connectivity applies to everything.

Every year designers and engineers redouble their creativity to improve our daily lives. Some beautiful inventions are presented every year at the CES of Las Vegas.

L’Observatoire Promotelec du confort dans l’Habitat recently conducted a poll about the French and Home automation. According to this report, 58% of survey respondents estimate that the future will be Domotics, which represents a 10 points increase over 2013. The study also reveals that 40% of respondents identified 4 priorities in this respect: connectivity, adaptability, security and programming. Of these, 44% stressed the importance of having a device to assess the household's energy consumption (heating, water, electricity).

While for some people home automation is a gadget, for others it opens up beautiful prospects for the future. Thus, 67% of respondents would be ready to equip the home with an elderly person to help them live better and longer.

The cost for equipping your home will vary depending on the amount of devices to install and the area to be covered. The starting price of a home automation box is about 150 €. It costs between 50 and 100 € for each module (switch or electric plug for example) and about 200 € for a connected thermostat. With a reasonable starting price, the technology is meant to be accessible to as many people as possible.

Science fiction thus reaches reality and it is not difficult to find a seaside villa with centralized home automation systems. Your home will soon be able to meet all your needs, it will tell you what's in your fridge, inform you about your health, wake you up gently and turn off itself after you fall asleep.

Similar news:
Risebox, nature into your home
Microalgae, the Green Gold
Phyto-Purification, a jungle in the bathroom
More Green than green, the Tree Fab Hab
The house of the future is printable
design France Tecnology
Archives
Recent news
Contact us